View-through attribution will make you question your marketing strategy 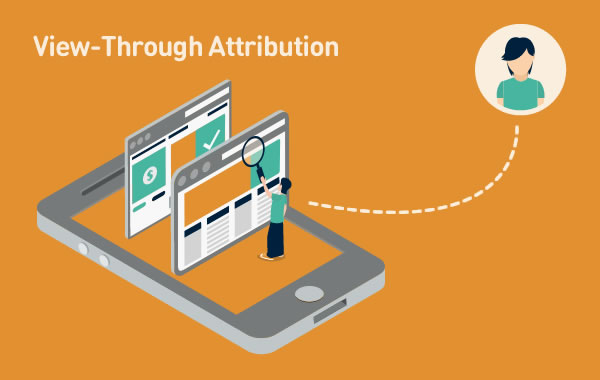 The most common way to measure the effectiveness of an online campaign is to track click-through conversions, i.e. how many customers clicked on an ad and converted.

But, are clicks really the only measure of success? If you don’t click an ad immediately after you see it, does it really mean that you are not interested at all?

Many marketers disagree. They believe that ads can influence customers’ future actions even if there is no ad click involved. Therefore, besides tracking clicks, it is neccessary to pay attention to view-through conversions as well.

What is a view-through conversion?

A few days ago, I saw an ad for sunglasses on a website I visited, but I didn’t click on it. That day turned out to be really nice and sunny, which got me thinking about spending more time outside. Later that day, I searched for that advertiser’s brand, found their webpage and bought new sunglasses.

This is exactly what a view-through conversion is: a user sees an ad, doesn’t click on it right away, but visits the advertiser’s site or makes a purchase later because he or she was influenced by the ad’s content. More formally, a “view-through” or a “post-impression” conversion can be defined as a conversion which occurs after a customer sees a display ad, with no ad click involved.

This clearly illustrates that campaign performance cannot be measured by clicks alone. Quite the contrary, various studies have shown that only a small number of people clicks on ads, while most conversions result from view-through. For that reason, in order to get a complete picture of campaign performance, it’s neccessary to take into account indirect conversions as well.

How does it work?

When an ad is loaded on a user’s device, it drops a cookie, even if the user does not click on the ad. If that user converts later, it’s possible to check which ad had influenced that action, and award the publisher who promoted it.

However, an average person is exposed to hundreds of ads every day and it’s not realistic to expect that all of them will influence that person’s actions. Some ads will lead to conversions, while others will simply be forgotten. That is why there is usually a set period of time in which a user has to convert after seeing an ad, and it’s called a “lookback window“. Why bother with view-through attribution?

Think about your own experience for a moment. You probably see ads all the time. Some of them certainly catch your interest. Do you react to them right away? If you don’t, does it mean that you are completely disinterested? Or could they affect your future buying decisions after all?

It usually takes time to decide on a purchase. Therefore, exposing consumers to display ads certainly increases the chance of their conversion, no matter if an ad click happened or not. Ads linger in customers’ consciousness and bring them closer towards making a decision about purchase.

View-through attribution can help marketers evaluate their online campaigns and optimize their future marketing plans. The main benefit for publishers is the fact that they will be credited appropriately for their advertising efforts which result in indirect conversions.

It seems that the benefits of view-through are obvious, so why do some marketers still object it?

Well, it’s simple. It’s easy to connect an ad click with a conversion. But it’s not that easy to provide that connection in case of a “post-view“ conversion because various factors can limit its accuracy. For example, it is possible that a customer didn’t see the ad which was on the site they visited or they already planned to buy a specific product, regardless of ads. Therefore, it is hard to be completely certain that a specific impression triggered customer reaction.

Another issue is the length of the conversion lookback window. If a consumer converts after the set lookback window expires, that conversion will not be counted and attributed. Therefore, determining its realistic length which suits specific shoppers and industry can be difficult.

Offline advertising has always been based on the view-through principle. We are exposed to ads not just through mass media like TV and radio, but also pretty much everywhere we go thanks to billboards, flyers, etc. Different ads are served to us with a single purpose – to encourage us to make a purchase. This doesn’t mean that you will rush to the store at the first sight of a new fuzzy drink advertisement, but it is very likely that you will at least consider buying it at some point while standing at the cinema food court.

This strategy has worked well for offline advertising, so it’s absurd to deny the impact of view-through in the online environment as well. If we already know a user has seen a display ad, it’s logical to conclude that this ad might influence their future actions. Therefore, it is not suprising that many studies have confirmed that view-through has a positive impact on brand awareness and conversion intent.

With that in mind, it seems like it’s time to embrace view-through attribution as a valid metric for campaign performance that can help marketers get a better picture of the effect of their advertising efforts.