Types of banner ads that will make your brand stand out 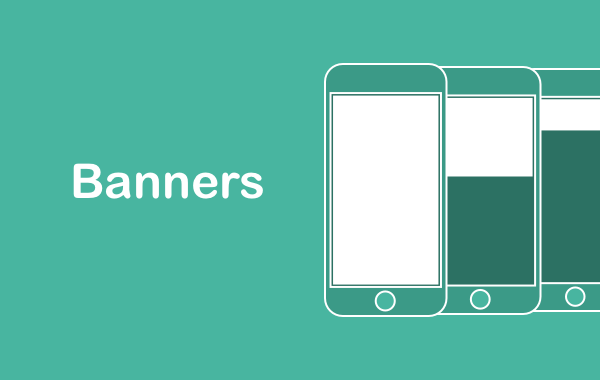 Trends in advertising come and go, but banner ads firmly hold their position. You will hardly spend an hour on the Internet without glimpsing on at least one banner.

However, there is much more to a banner than what meets the eye. Banner placement, size, content, design… there is a lot for advertisers to think about before their banner meets its audience. A slightest detail can affect the course of a whole campaign.

What are banner ads?

Banner ads are rectangular graphic displays on a website and, usually, the first contact a potential customer has with your brand. If a user clicks on a banner, they will be redirected to the advertiser’s own web site. Banner ads are a commonly used form of advertising because of their diversity, inexpensiveness and easily measured results (indicated by the click-through rate).

The evolution of banners

Online banner ads have existed for more than 20 years, but their shape and size haven’t changed much. However, their content did.

Static banners – images or text enclosed in still frames – are slowly becoming a thing of the past. Because of their overall presence, web users have developed banner blindness – a phenomenon where web users consciously or subconsciously ignore banner ads. If we want banner ads to fulfill their purpose, some polishing is necessary. Banners must suit the needs of the market. And today’s market loves multimedia. So it is not surprising that users exposed to rich media are three times more likely to convert.

Rich media ads are more than just simple images – they contain video, sound, animation, or graphics. They are advertisers’ latest attempt against users’ ad indifference and banner blindness. Rich media enables advertisers to present users with interactive ads, which are more likely to elicit a response.

Choosing an effective banner is not as simple as it sounds, considering the fact that they are one of the most versatile forms of advertising. To give you a better insight into this variety of options, we’ll examine the popular formats used by ClickAttack – Southeastern Europe’s premier mobile network.

The smallest (300×50/320×50) and the cheapest banners can mostly be found on the top or bottom of a web page and they are rarely used by smaller businesses because it is easy to overlook or ignore ads of that size.

The same location is also available for king-size banners (300×150) which are currently the most popular format. They are large enough to be noticed without disturbing users’ experience and their position draws attention.

Interactive banners are, as their name suggests, highly interactive and dynamic. They usually offer more than one interaction, trying to get users to engage. One such banner can contain any interactive element (a game, video, etc.) and at least one call to action (for example, a contact form) – all within a single banner.

Let’s take a look at a few examples of successful banner ads.

The first example is a parallax scrolling banner used in a beer campaign. It offers a great user experience because of its interesting visual transition. Parallex banner does not interfere with the content the user is initially looking at. Instead, it shows a piece of a larger „background“, whose different parts are revealed by scrolling the page up and down. We will often be tempted to see what is hidden because of our natural curiosity, which is why parallax banners work so well.

The gamified banner for a mobile provider campaign attracted users by asking them to participate in a game. It was a memory game in which the user had to reveal two identical images to discover a special offer. Once discovered, a simple message would be shown: „Dial *100# to activate“. The campaign was targeted at the audience that spent a lot of time on popular apps (such as Viber or Facebook), which would likely be interested in the promoted offer (no limit internet). The campaign took into account the trends and habits specific to its target audience, including the fact that many active mobile users tend to play games. The gamified banner suited the needs of its targeted audience well, so it is not surprising that it achieved a high CTR of 19,04%.

This next example was from a children’s food campaign. The user was supposed to touch the screen to move the Lino mascot. After that, the banner offered the user an opportunity to participate in a contest by clicking on a red „Click and apply“ button. Simple and effective.

With interactive banners, there are no limits to creativity, which is why such ads often result in a higher user engagement.

However, creating an amazing banner is only half way to success. The other half is good targeting.

If you ask an advertiser who they want to target, the worst answer would probably be everyone. Not every product is for every person. You must know who your audience is and have a tool to reach it. For example, ClickAttack uses AdCumulus’ Ad Server because of its reliability and precision. Without a good targeting tool, your banner won’t be seen by the right audience and your marketing efforts will be wasted.

If you wouldn’t click on it, why should your audience?

Banners are widely used because they are an inexpensive way to create brand visibility and increase its recognition. However, many users have grown indifferent to ads and learned to (sub)consciously ignore them. To keep your ad from being ignored, it is important to make it stand out and offer users something of value. Since the space on a banner is limited, the displayed information must be carefully selected and well-presented.

Would you be willing to click on a lifeless, amateurish ad? Probably not, and most people share that opinion. Keep that in mind while planning your new campaign. Make your banners presentable and offer users something that will spark their interest and there is a high chance that your efforts will pay off.

After all, if your ads are just like all the rest, why should you expect good results?