7 types of ad fraud that can hurt your business 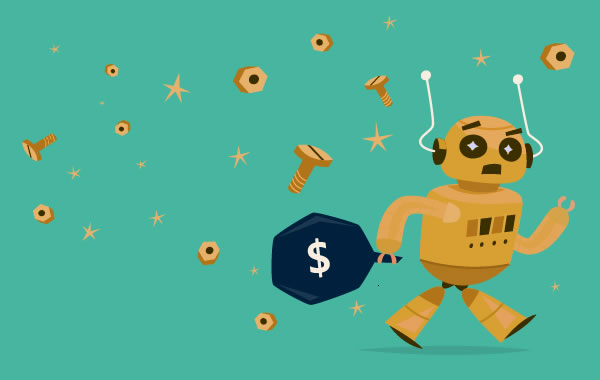 Adage reports that, for every $3 spent on online advertising, $1 ends up in fraudsters’ pockets.

Investing money and getting nothing in return is hardly a marketer’s dream. But it’s the reality and the best way to handle the problem is by getting to know the enemy.

How ad fraud hurts the industry

Ad fraud refers to activities that aim to get commission for ads which are never really seen.

It is harder than ever to detect fraud, so advertisers can no longer completely rely on performance reports. They often end up investing even more into their “successful“ campaigns, not realizing they have been tricked.

As a result, advertisers lose a lot of money, along with their trust in digital media.

Bots – the plague of online advertising

When talking about ad fraud, it’s almost impossible not to mention bots.

Bots are pieces of software that perform specific actions automatically.

Their purpose is to trick advertisers into thinking that real users completed specific actions. That way, advertisers pay publishers for impressions or clicks that real people haven’t actually seen.

In the beginning, bots were pretty easy to detect because their behavior was simple and predictable.

Over time, they have become capable of completing more complicated tasks. For example, they can now fill out a form or watch a video.

Because bots can now imitate human behavior and interests well, they are common in retargeting fraud. To advertisers, they seem like ideal customers, so they end up paying even more for nothing.

Although bots are very popular, there are many other methods of collecting money from unsuspecting marketers.

Basically, they are large groups of low-paid workers whose job is to click on ads.

Paying attention to analytics is the easiest way to spot this kind of fraud. If you notice a lot of clicks suddenly coming from developing countries such as India or Bangladesh, you might have a problem.

Placing more than one ad in the same ad spot is called ad stacking. This way, only the top ad is seen, but advertisers unknowingly pay for all of them.

Pixel stuffing is the practice of stuffing ads into a single pixel. Real users trigger impressions, although they never actually see any ads because a single pixel is impossible to spot.

This is called ad injection and it’s done through browser extensions or adware plugins. By doing so, paid ads get replaced with other ads, damaging both advertisers and publishers.

Another way to make money off human traffic is by cookie stuffing.

It’s the practice of attaching multiple cookies to users without their knowledge.

If such users convert later, the fraudster gets paid. This means that affiliates who really did contribute to that conversion never get their compensation.

Domain spoofing is the practice of selling ad inventory on low-profile websites by falsely presenting them as premium websites.

Advertisers believe their ads are being served on a trustworthy website, but they often end up on suspicious places instead.

This hurts advertisers because their offers can end up next to unwanted content. It also hurts publishers because the money they should be making ends up in scammers’ pockets instead. 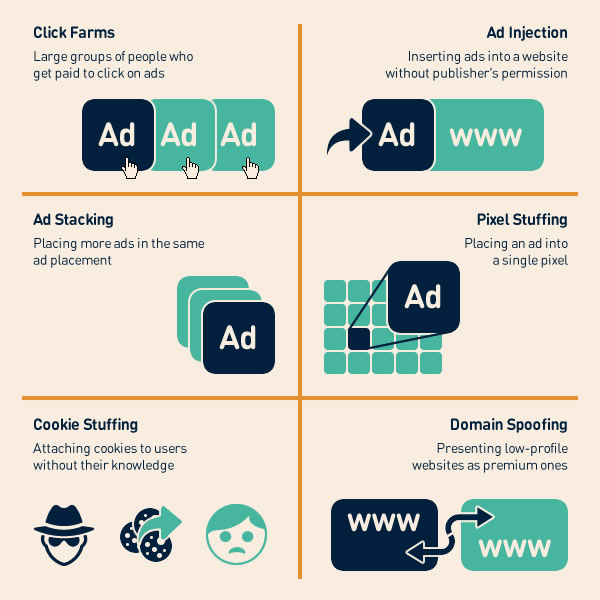 Types of ad fraud that use human traffic

How to prevent ad fraud

The industry keeps boosting their defenses against ad fraud, but fraudsters keep searching for new ways to avoid them.

However, there are a few things that can help you minimize fraud and increase the effectiveness of your campaigns.

They say a picture is worth a thousand words, so here’s to the visual types:

Ad fraud is one of the biggest problems in the online advertising industry.

For that reason, both Affiliate Software and Ad Server already have their built-in mechanisms for fraud detection.

They notify you about any sudden changes in your traffic, allowing you to react on time. Moreover, by monitoring complete user funnels – from impressions to clicks and conversions – you can spot unusual differences between the CTR and conversion rate among affiliates.

Our ad intelligence tool, AdInvestigate, can help you combat ad fraud as well.

It allows you to monitor ads on your own or competitors’ websites and see the entire advertising flow, from an ad to its landing page.

Publishers can finally see what’s running on their inventory, while advertisers get the chance to check who is promoting them and how. Furthermore, you can test any service using real devices and check its compliance.

Besides helping you detect fraud, this tool also helps you improve your marketing strategy.

Ignorance is not bliss

Many advertisers are making a fuss about ad blocking these days, forgetting that they have a bigger problem.

In the meantime, fraudsters keep developing sophisticated methods of ad fraud and draining marketers’ budgets more than ever.

Can any advertiser be truly safe?

Anti-fraud tools can certainly help you protect your marketing dollars from the bad guys. However, fraudsters are getting more creative each day so don’t get too comfortable.

Make sure your defenses are up-to-date at any time and keep a close eye on your campaigns in case some fraudster tries to slip under the radar.